Randy Sue Coburn began her career as a journalist whose essays and articles appeared in numerous national magazines and major newspapers. Her screenplays include Mrs. Parker and the Vicious Circle, the 1994 film about Dorothy Parker that premiered at the Cannes Film Festival and won Jennifer Jason Leigh the National Society of Film Critics Award for best actress. Film work and teaching at The University of Washington subsidized the writing of Remembering Jody, (1999, Carroll & Graf), and Randy Sue’s second novel, Owl Island, was published in June, 2006 by Ballantine, a division of Random House Publishing Group. A Better View of Paradise, also from Random House/Ballantine, is being published in July, 2009. Born in Chicago and raised in South Carolina, Randy Sue is a Phi Beta Kappa graduate of The University of Georgia. She lives along the waterfront in downtown Seattle and relishes morning strolls through the Pike Place Market with Binx, a floppy-eared terrier known by name to many more vendors in the Pike Place Market than his mistress.

Link to her works: http://www.randysuecoburn.com/works.php 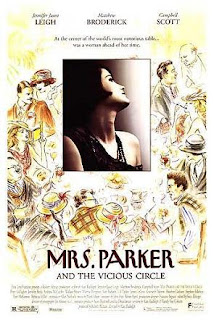 Mrs. Parker and the Vicious Circle is a 1994 American film scripted by writer/director Alan Rudolph and former Washington Star reporter Randy Sue Coburn. Directed by Rudolph, it starred Jennifer Jason Leigh as the writer Dorothy Parker and depicted the members of the Algonquin Round Table, a group of writers, actors and critics who met almost every weekday from 1919 to 1929, at Manhattan's Algonquin Hotel. The film was an Official Selection at the 1994 Cannes Film Festival and was nominated for the Palme d'Or.